This tutorial is an introduction to dealing with tidy spatial networks in R, demonstrating a full process of data acquisition from the open spatial database OpenStreetMap, data preparation, and basic network analysis like isodistance and shortest path calculation. Along the way, we use the default plotting methods for spatial network objects, but also make use of the ggplot2 and tmap packages as alternatives.

To follow this tutorial, you will have to have a number of packages available, which can be best sorted out with the following command:

If you run into issues installing and running sf (which relies on spatial libraries external to R), please refer to their installation instructions.

The main package this tutorial centres around is the sfnetworks package (Lucas van der Meer, Lorena Abad et al.), which is the result of joining what the tidygraph package does for networks with what the sf package does for spatial vector data.

The data structure central to this package is a combination of two spatial objects, one describing the nodes (or points) and another describing the edges (or lines connecting the points). In the words of the developers:

A visual explanation of sf objects by Allison Horst (copyright hers): a dataframe with sticky geometries in a list column. The geometries are “sticky” because they don’t vanish when, say, you select() columns.

In the edges component of a network, it is also possible (or necessary) to specify where the edge starts and finishes, using the from and to columns. Such information can be interpreted as the direction of the edge in a “directed” network, or simply as its two extremities in the case of an “undirected” network.

Finally, another important characteristic of the edges is their weight. This can relate to any kind of information, but if we are interested in distances between points, it will typically be the length of the edges.

From OSM data to an sfnetwork

Although the structure of an sfnetwork seems to be quite complex, it is possible – and useful! – to use a shortcut and create one from a simple collection of linestrings.

We can download download data from a spatial vector database like OpenStreetMap (OSM), focus on the lines (or “ways”) and convert that sf object into an sfnetwork that will use the lines as edges, and their endpoints as nodes.

Let’s first download from OSM all the ways that are primary used by pedestrians in the suburb of West End. (To understand how these features are tagged in the database, a good starting point is the Map Features page on the OSM wiki.)

Finding the right combination of OSM tags to use is always an iterative process, refining the selection at each step.

We choose to return an sf object, which might contain points, lines and polygons. We are only interested in the lines:

We can visualise the resulting object with the sf package: 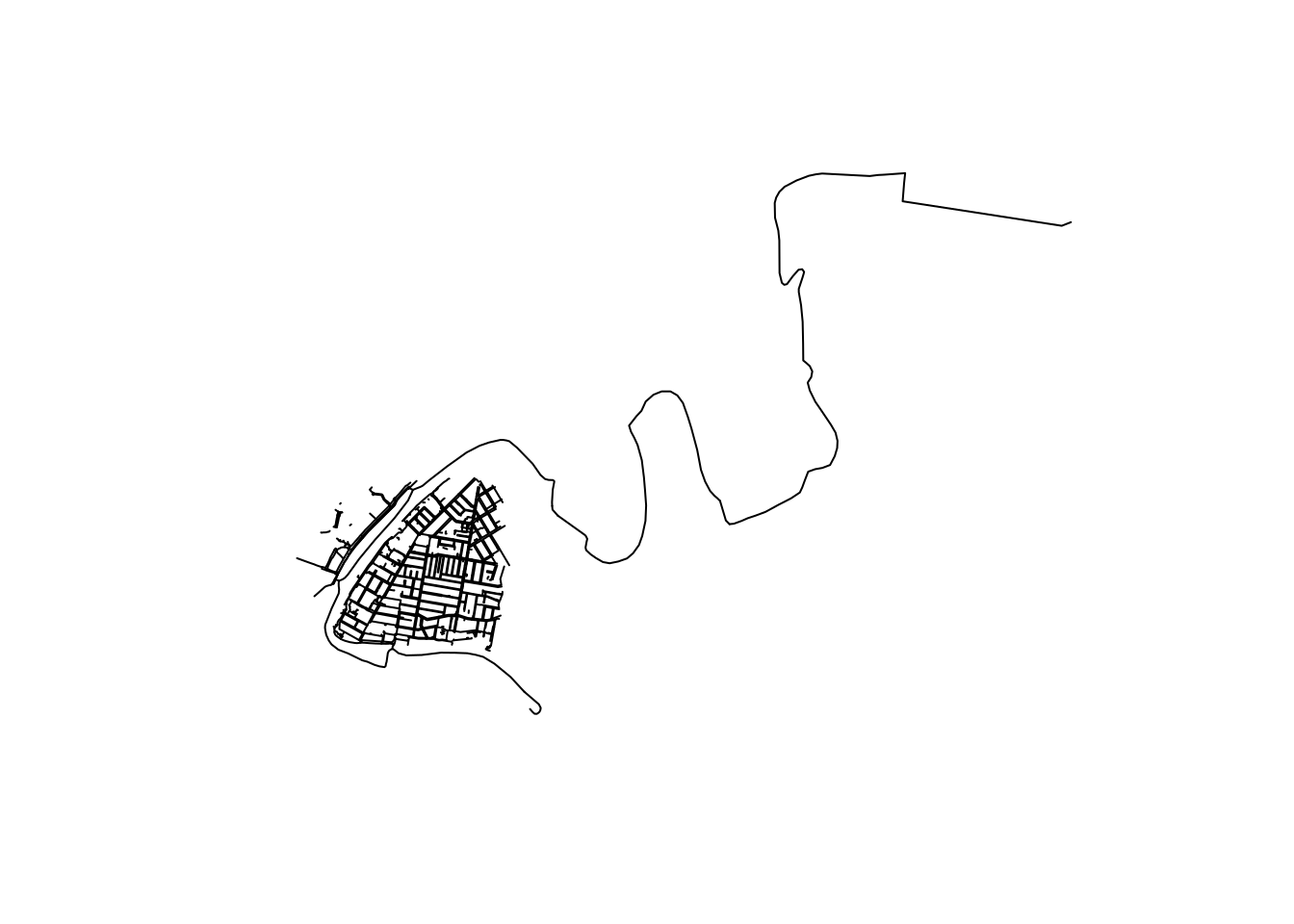 It seems to have kept a ferry route, which was tagged with foot=yes and route=ferry on OSM. We can remove it:

Another caveat in our process is that some footpaths are mapped as closed ways on OSM, and are therefore returned as a polygon: 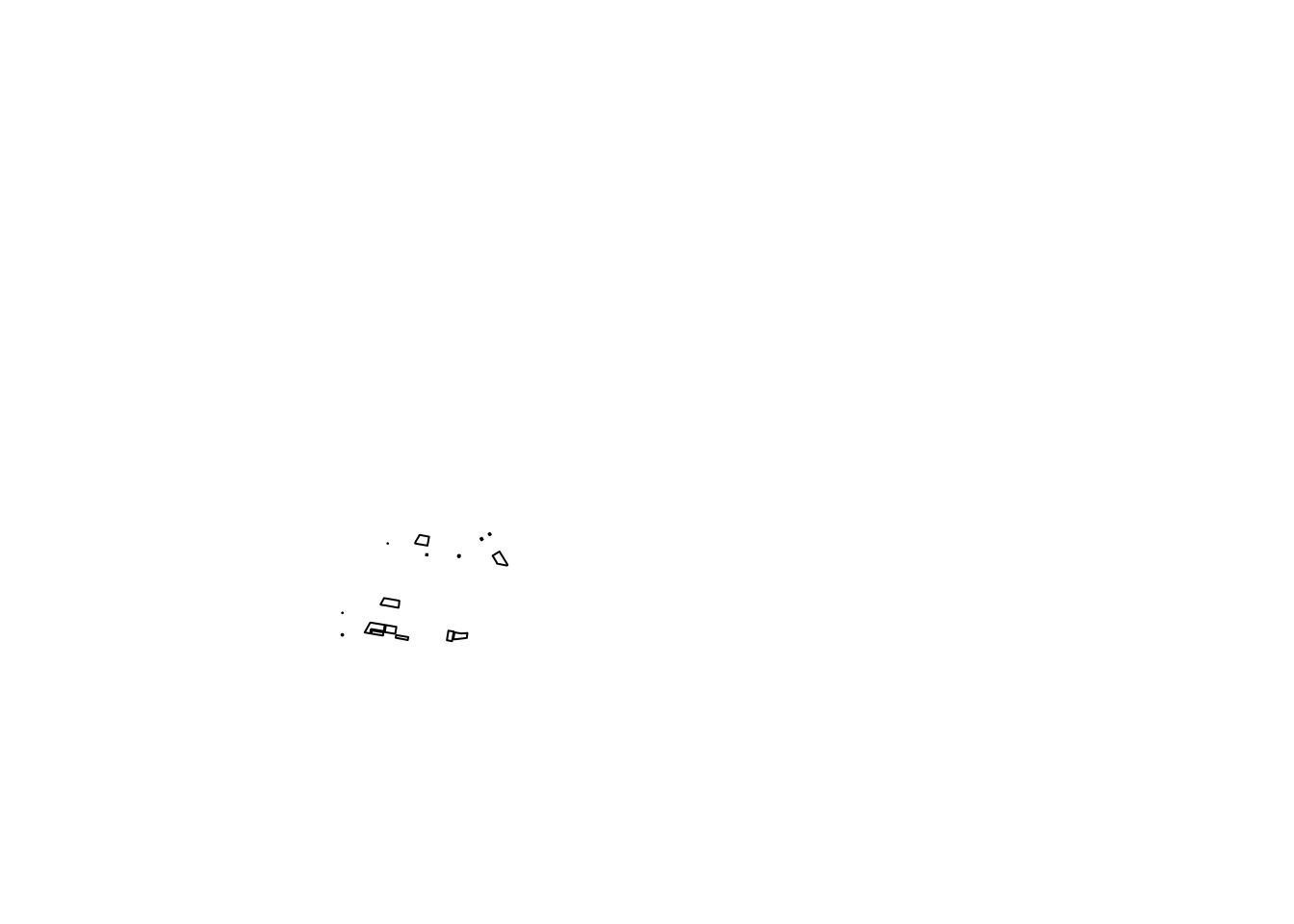 The smaller ones are proper pedestrian areas, but the bigger ones are probably footpaths encircling a whole residential block. It is possible to “cast” these polygons as ways and include them in the network:

This is what we are left with: 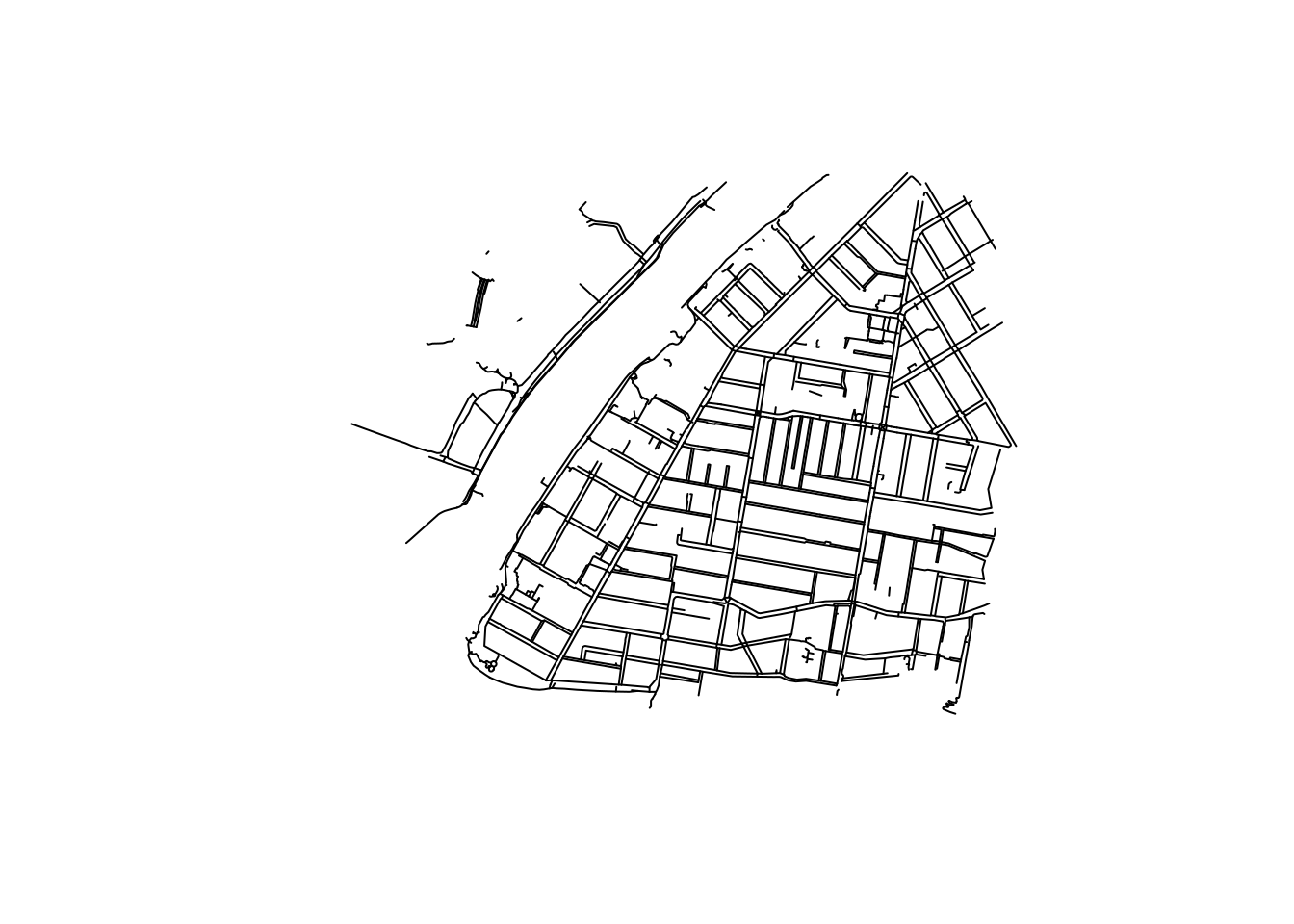 We can now convert the object to an sfnetwork object, making sure we set it as undirected (the default is directed = TRUE): 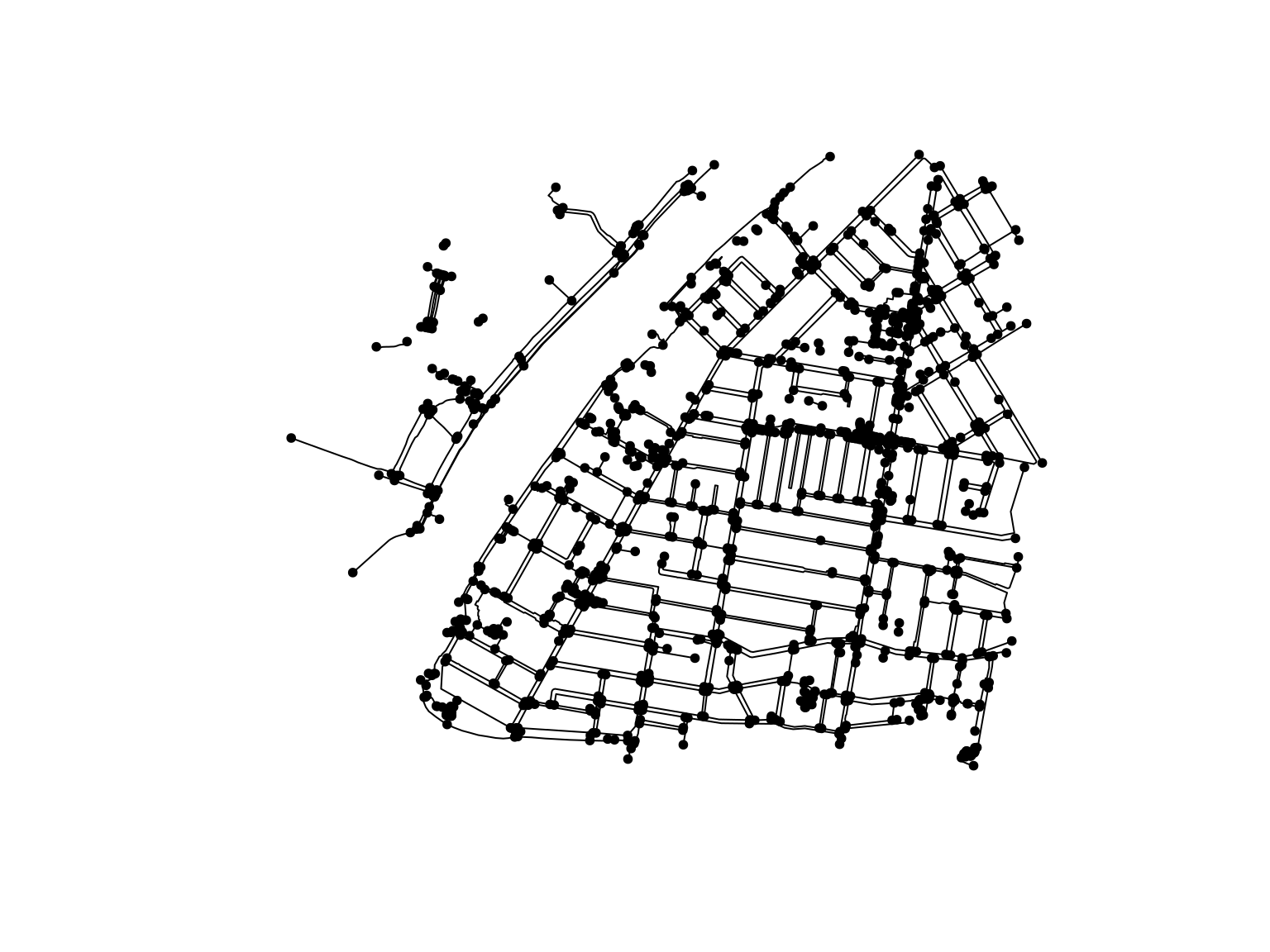 The current coordinate system for the network is a global one, EPSG:4326.

st_transform() allows us to transform the coordinates to a different projection. For this part of the world, a recent Projected Reference System is EPSG:7856 (or “GDA2020 / MGA zone 56”).

If the command above gives you a GDAL error, reassign the original CRS first: st_crs(foot_net) <- 4326

sfnetworks and tidygraph include many pre-processing and cleaning functions for graphs, some of them detailed in this article.

One relevant example for this dataset is the subdivision of edges: because some edges have interior nodes that are endpoints of other edges, they will not be connected to each other when analysing the network.

We need to combine tidygraph’s convert() function with a “spatial morpher” function from sfnetworks:

Note that this will only happen for features sharing a node: if two edges overlap, like for bridges and underpaths, no extra node will be created where they cross, and therefore no new connecting endpoints will be created for them – which is good news!

Also note that using to_spatial_subdivision() will copy tags into each of the subdivisions of an edge. This usually isn’t a problem (think speed limits, surface, lighting, width…) but can be in some cases (for example if the length of the edge had already been added). The order of processing often matters.

Another example is the removal of nodes that have only two edges connected, also called “smoothing of pseudo-nodes”. This would be useful to simplify a network and reduce the processing times needed. We again use a combination of convert() with the relevant spatial morpher, to_spatial_smooth(): 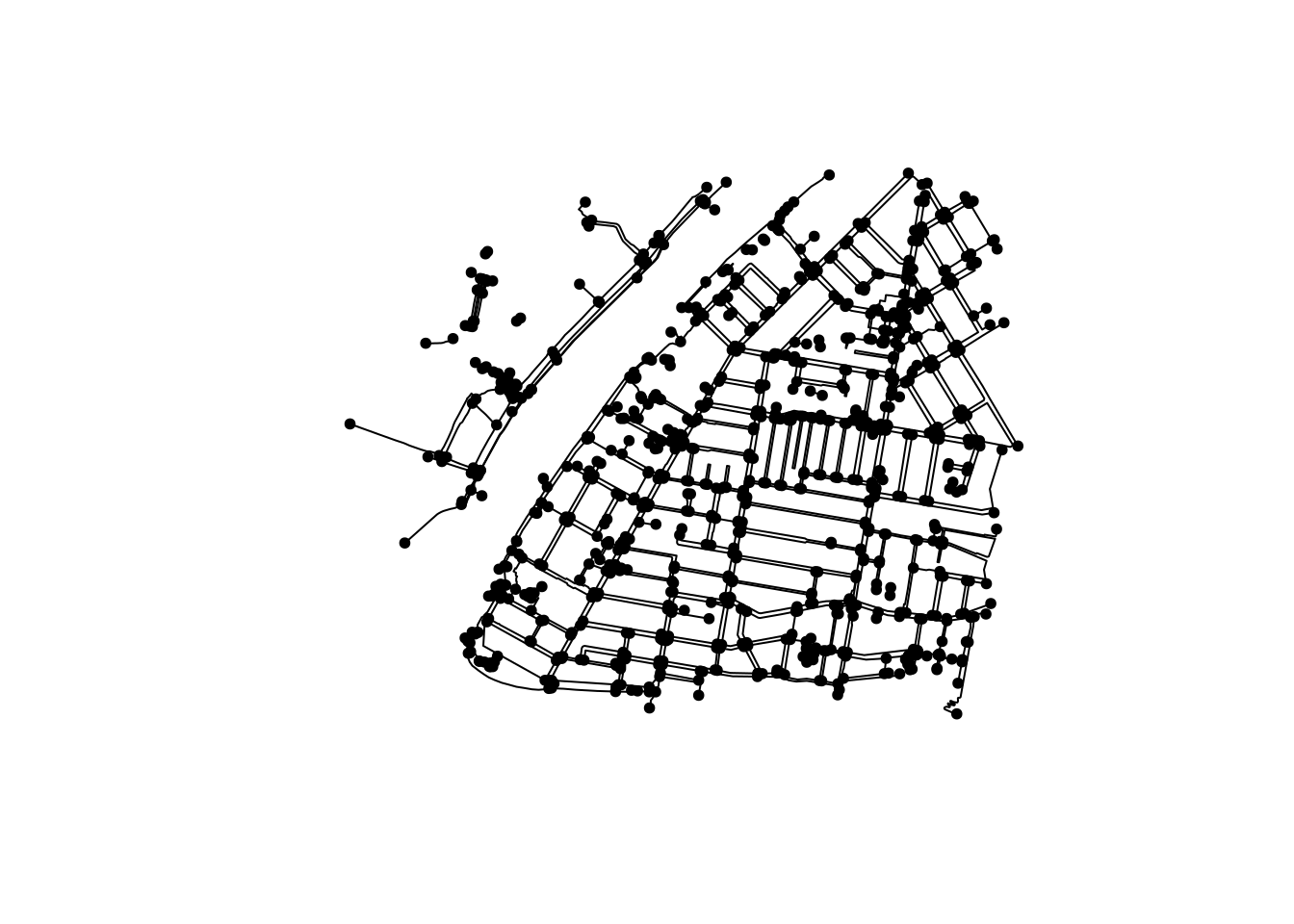 For our example, simplifying the network might not be useful:

More information about “spatial morphers”, including what options exist for dealing with attributes when multiple features are merged, is available in the documentation: ?spatial_morphers

As mentioned before, a common weight associated with each edge of the network is the edge’s length. We can add this weight to our network, but we need to first “activate” the part of the object we want to modify:

Using st_as_sf(), we can extract the components of an sfnetwork object and use them in a familiar plotting system like ggplot2: 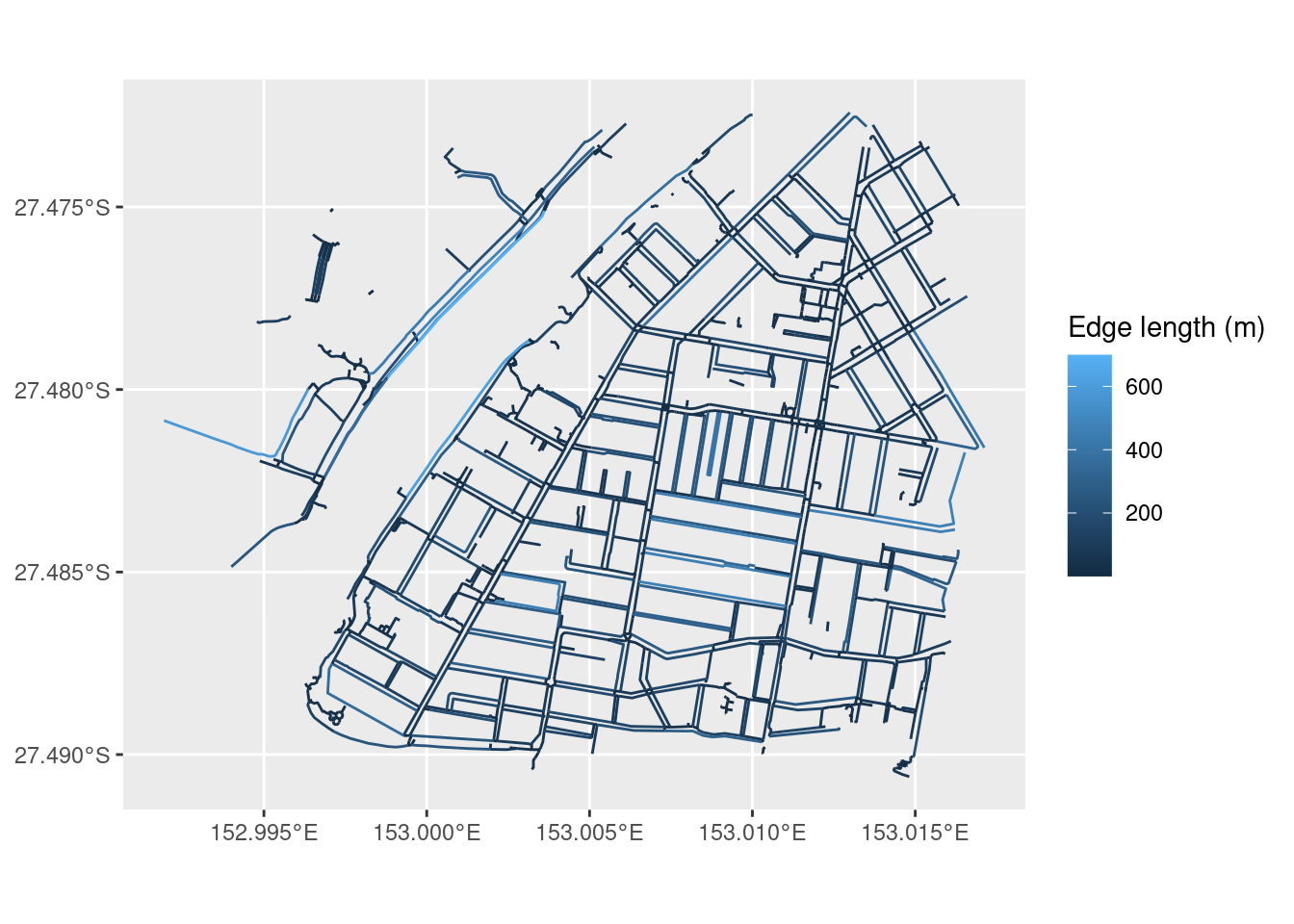 At this point, it might be interesting to create an interactive visualisation to zoom into, which might help spot issues with the data.